Making soup can be easier than you think and is an excellent opportunity to use up ingredients. I thought it might be a useful to share my thoughts on soup making. I’ve tried to keep it non-technical to make it useful to a broad audience. Each photo in this post leads to one of my soup recipes. This one is ‘Potato Red Onion & Rocket Soup with Brie & Basil Toasties’.

There are certain principles when making soup, that will help improve your soup making. Generally, I try to avoid putting “everything in but the kitchen sink”, because you’re going to end up with a miss-mash of flavours. Also it not necessary to boil the soup for hours, particularly in the case of vegetable soup because then the vegetables taste stewed rather than moorish. Any vegetable you can think of can go in a soup, the trick is to get the combination right!

Root Vegetable based Soups
If you put root vegetables in (carrots, parsnips, turnips, swede (Rutabaga), celeriac, and potatoes) they work fine in various combinations, but do not use “summer vegetables” with root vegetables.  Various kinds of green cabbage or other brassica, such as, kale or spinach also work well with root vegetables, as do *leeks.  You can make delicious soup from lettuce, but you need to have a counter balance to the often-bitter flavour of lettuce e.g. Little gems can be great in certain types of fresh pea soup. Another salad leaf like rocket (arugula ) can also act as an interesting finishing touch to a mild flavoured soup like potato (click on the top photo for my recipe).

Summer Vegetables based Soups
Include zucchini, butternut squash*, artichokes, aubergine, peppers, marrow,  etc.  If making a soup with these kinds of ingredients, I tend to roast them or lightly char-grill.  *Although butternut squash is grouped with other summer/autumn squashes, butternut is really considered a winter squash because of its thick skin.   These days its available most of the year and can make stunning soups like this ‘Butternut Squash and Black Garlic Soup’, just click on the photo to go to the recipe.

Thickening agents
Generally speaking root vegetable soups are thickened with potato in various forms, from dry powder all the way to baked potato, and by the puree of the vegetables themselves. Summer vegetable soups work better if you use various dried or tinned beans (fava beans, haricot beans, pinto beans, etc.). Bread is also neutral enough to work in most kinds of soup, as is rice, but the latter works better in spicy types of soups like curries. In some circumstances lentils can also be used in soups from either group. Another neutral thickening agent the pasta in minestrone, or noodles in mom’s chicken noodle soup.

Roux based
These are thickened with flour but are seen less and less because of the growing number of people who have an allergy to gluten. Cream may sometimes be added to either a roux based soup or a puree.

Puree
A puree soup is thickened by its own ingredients, such as a potato based soup like leek and potato. Or pea soup is another wonderful morish winter soup, often served with ham or smoked sausage.

Onion Family
Onions, shallots and garlic can go in most kinds of soup, where as leeks are a little more bitter so they go better in root vegetable based soups.  The classic French Onion soup topped with a toasted slice of baguette smothered with melted cheese is still a great soup today (click on the picture for my take on this classic recipe).

Variations on Tomato
A tomato soup made from a combination of tinned and fresh tomatoes can be delicious.
As the winter nights draw near, you can roast the fresh tomatoes first to give a more intense flavour. I often like to combine red peppers to change things up. Try using a different fresh herb such as coriander instead of using basil.

Pulses
With so many lentils, dried peas and beans to choose from, here are a couple of suggestions: In a clear stock with finely diced vegetables you can add cannellini beans because they hold they shape and texture well or use a dried split pea to create a stunning looking soup like this ‘Split Yellow Pea Soup’, just click on the photo to go to the recipe. 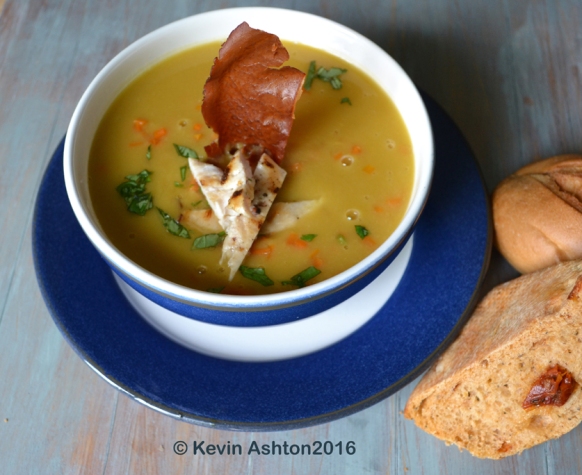 Clear Broths
Such as consommé when done well these are the kings of soups but rarely seen even in restaurants.  You need a good quality stock to begin with.

One size fits all
Unfortunately some corporate restaurant chains wont make soups that have meat in them because company policy states the soup must edible for vegetarians and non-vegetarians.   This a crying shame which prevents some great classics being put on menus today.

Think Outside The Box
A lot of “chefs” are way too pedestrian when it comes to making soups, here a couple of suggestions.

An often overused vegetable in soup is broccoli e.g. broccoli & stilton soup. So why not try a lesser used vegetable such as cauliflower in your soup. On its own it can make a subtle and velvety creamy soup.  Or if you fancy something with more spiciness you could make a curry soup and add some cooked pieces of cauliflower and chopped coriander at the end.

A tomato and red pepper soup garnished with small grilled pieces of Aubergine tossed with thyme and a little roasted garlic puree. In fact a creative garnish such as little pastries  stuffed with melted cheese can make a good soup a show stopper.

If you live in a cooler country like the UK, often we end up with lots of green tomatoes in the autumn with not enough sunshine to ripen them. However, you can make something other than chutney from them, such as my delicious Green Tomato Soup with Roasted Chillies.

*If you think this article has been helpful please let me know via the comments and I could write notes on other subjects.

24 thoughts on “Improving your Soup Making”