Just like wine, extra virgin olive oil or EVO as it is called in the catering business can have very different characteristics, depending on soil, age, type of olive tree,  climate, harvesting methods and even the altitude the olives are grown at.

Most supermarkets offer upmarket deluxe types of olive oil, you know the type, fancy bottles of olive oil by brands you have never heard of.  So as a consumer, especially in the run-up to Christmas, you find yourself staring at these attractive looking bottles wondering whether to take a chance and buy that more expensive oil for someone you know who loves cooking? But the truth is many of them don’t justify the additional price when I’ve tried them. But the two Spanish olive oils I am talking about in this post really do justify the price tag, and are definitely worth considering if you have a gourmet foodie on your gift list.

Olive Trees
Olive trees grow slowly. The first olives appear when the tree is between 3 and 7 years old (depending on the variety). An olive tree reaches full maturity after 10 years and starts to decline in fertility after about 150 years. In favourable conditions, they can live up to one thousand years and still produce olives. A few years ago, I had the change to visit one of the oldest remaining olive tree forests in Europe on the island of Pag and see the ancient forest of Lun which is rather magical.

Spanish Olive oil
It may or may not surprise you to learn that Spain is by far the largest exporter of extra virgin olive oil in the world, producing more than three times the quantity of Italy, and responsible for nearly half of the world’s production in total. This prominence is nothing new, with olive oil production in the country dating as far back as the second millennium B.C., and a plethora of archaeological evidence proving Spain had been supplying the Roman Empire with olive oil.

History of Oro Bailen
Traditionally olive growers are not always the same people who mill the olives or are involved in the bottling or marketing of the finished oil.
About twenty years ago the Gálvez-González family whose main business at that time was brick making, bought two olive grove farms, “La Casa del Agua” and “Los Juncales”. Several years later the family decided that there was room in the olive oil market to create exceptional olive oil, but to do that they would need to be in control of the whole process from growing the olives, harvesting, pressing, processing the oil and even bottling to ensure complete traceability.
José Gálvez set about his education in all aspects of creating olive oil and is now the master miller, and through his study, he learned not just how to make a great olive oil but what he needed to do to make it consistent year after year.

“La Casa del Agua” and “Los Juncales”
Both of their olive farms are at an altitude of 400 meters at the border between the Castilian Plateau and the Valley of the Guadalquivir, this helps reduce the problem of flies you might find at lower altitudes. Average temperatures and rainfall in the area the farms are situated between, the countryside of the Guadalquivir River and the Sierra Morena, also make for ideal olive growing conditions. The olive trees are completely irrigated at all stages of their development.

Because Oro Bailen control the whole process from growing through to bottling, each step of the process can be done at the optimum time to help create a superior olive oil.  After the olives are harvested, they are examined and then milled in around 2 hours, minimising damage to the fruit and oxidation. The olive juice’ that is extracted is then allowed to rest for 15 days before it is filtered and then stored ready for bottling.

The Picual olives are collected in the cool of the night as the trees are smaller and lower and can be harvested by one man and his machine. The Arbequina olives are harvested by teams in the traditional way, with sticks and nets in the mornings.

Picual Olives
For some of my readers, this might be the first time you have delved into the different varieties of olives used to make EVO, and the first one I’m going to talk about is called Picual.

The Picual olive variety, also known as Marteña or Lopereña, is widely grown in Spain.  A large amount of the Picual olives are grown in the Spanish province of Jaén.  Picual trees are estimated to account for 25% of all olive oil production in the world, but just like grape varieties, not all olive oil made from Picual olives are equal, the soil, how the olive trees are cared for, the harvesting, processing and storage methods all impact on the quality of the oil. 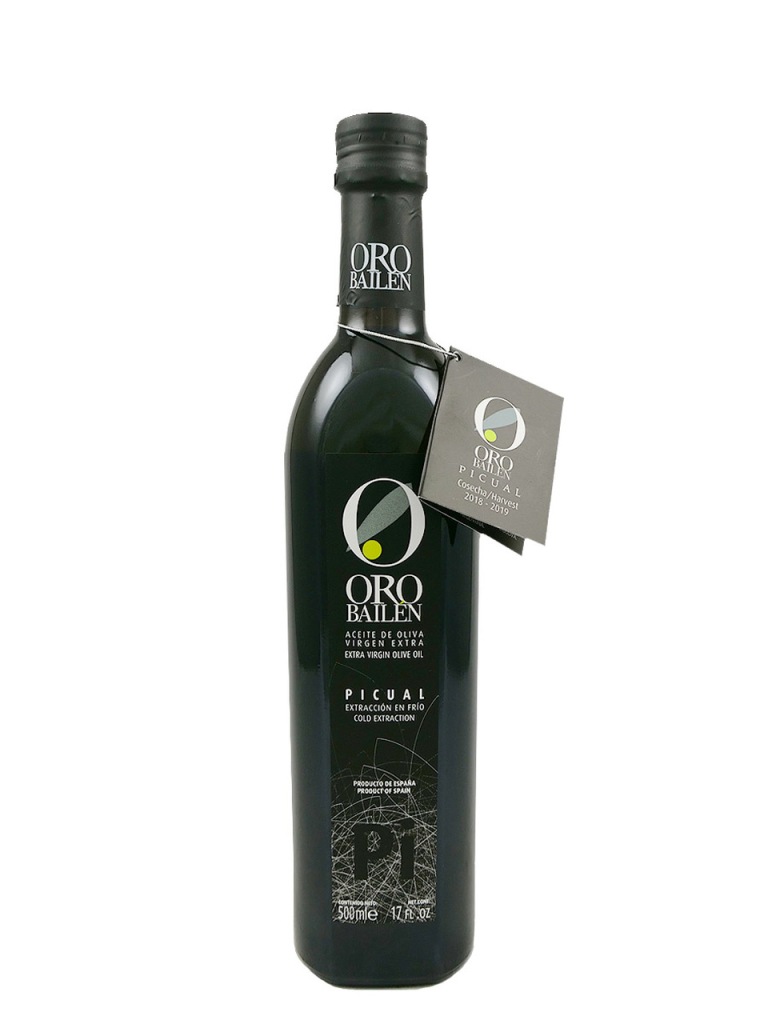 Oro Bailen Reserva Familiar Picual
A consistent front-runner on the international award-circuit has won no less than 27 awards around the world in the last 3 years. So you can see this is not just ordinary Picual.  A truly outstanding EVO in a class of its own is produced in the olive groves located in the foothills of the Sierra Morena, the northern mountain range in the province of Jaén. Harvested at the beginning of November at their optimal point of ripeness, this oil has exceptional characteristics, making it stand out above other oils due to the intensity of its fruity and herbaceous flavour and the complexity of its aromas, which include tomato, apple, banana, green almond, fig and freshly cut grass. This EVO is exceptionally balanced, and your taste buds will tell you this is something special.

Arbequina Olives:
The second type of olive I’m going to talk about is called Arbequina and was introduced to Europe from Palestine by the Duke of Medinaceli in the 17th century. Arbequina olives are highly aromatic and in the last three centuries have become the most planted type of olive tree in the world. Arbequina olives are smaller in size and tend to be more symmetrical in shape.  Arbequina trees are adaptable to different conditions of climate and soil, although it does best in alkaline soils; it thrives in long, hot, dry summers, but is frost-hardy and pest-resistant. Its relatively small size allows the olive trees to be planted in denser formations. 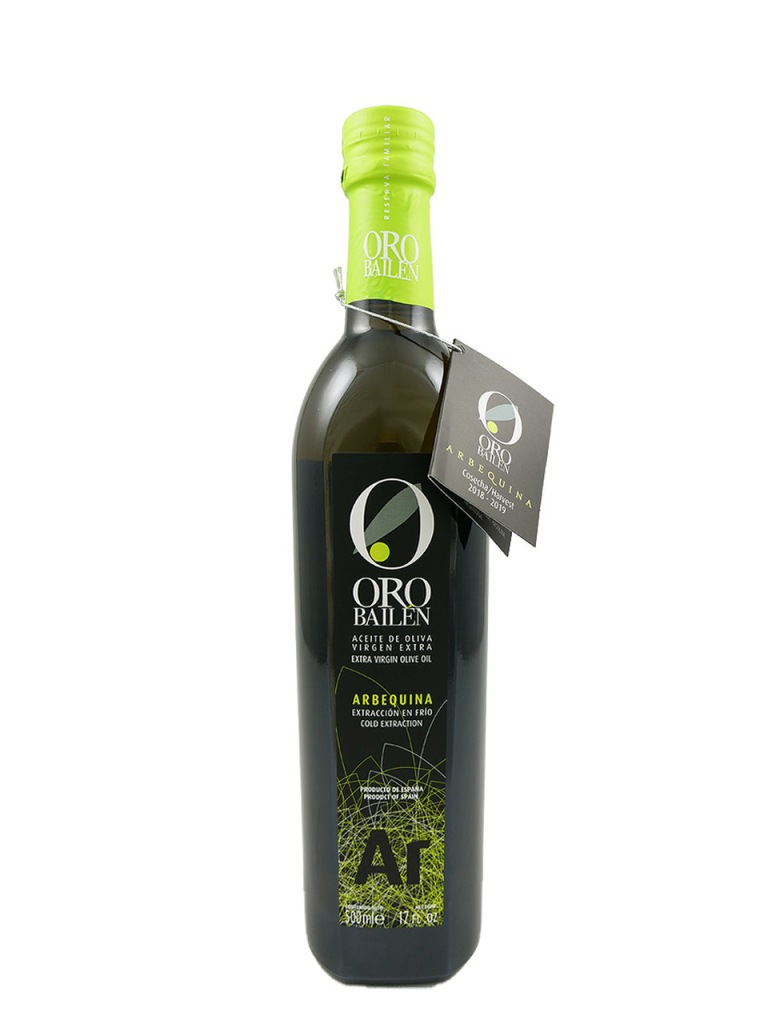 Oro Bailen Reserva Familiar Arbequina:
A new outstanding mono-varietal oil EVO pressed from 100% Arbequina olives.
The Gálvez González family spent a great deal of time and care meticulously perfecting the quality of their Arbequina olive oil to match that of their world-class Picual olive oil. This new oil from Oro Bailen is already impressing people who are familiar with top quality EVO’s.  This Arbequina oil delivers aromas of tropical fruits, banana and sweet almond. It is incredibly balanced in fruitiness and pungency and is the perfect oil to complement lighter dishes such as white fish, steamed vegetables, green salads and is even ideal for desserts and fruit salads.  Great olive oil doesn’t mask the flavour of the food, it brings the flavour out, and just like Oro Bailen’s award-winning Picual EVO the Arbequina has already won seven awards from around the world in 2019.

Buying these two Olive oils
At the date of publishing this post in October 2019, both of these olive oils are available on at various sites on the internet at around £16 plus delivery. Prices do change so shop around but I used the Artisan Olive Oil Company

Visiting Oro Bailen
If you are planning a trip to the Andalusia region of Spain then perhaps it’s worth a tour of the factory.  They are available on weekdays, beginning with an introduction to the world of the olive oil, a guided tour of the mill, where the extra virgin olive oil production process is explained, from the fruit harvesting, cleaning, beating and extraction, to the storage and bottling.  The approximate length of the tour is 60 – 90 minutes.   You do need to phone +34 953 548 038, +34 682182132 or email turismo@orobailen.com at least 48 hours in advance. Oro Bailen also has a rather impressive shop where you can view a whole range of their oils marmalades and oil pearl capsules after your tour.

May 2020 update:
Congratulations to Oro Bailen for winning 4 gold medals at the 2020 NYIOOC competition (New York International Olive Oil competition), which is the world’s largest and most prestigious olive oil contest  If you click on the photo it will take you to a list of some of awards Oro Bailen has won.

Don’t forget to visit my other food blogs