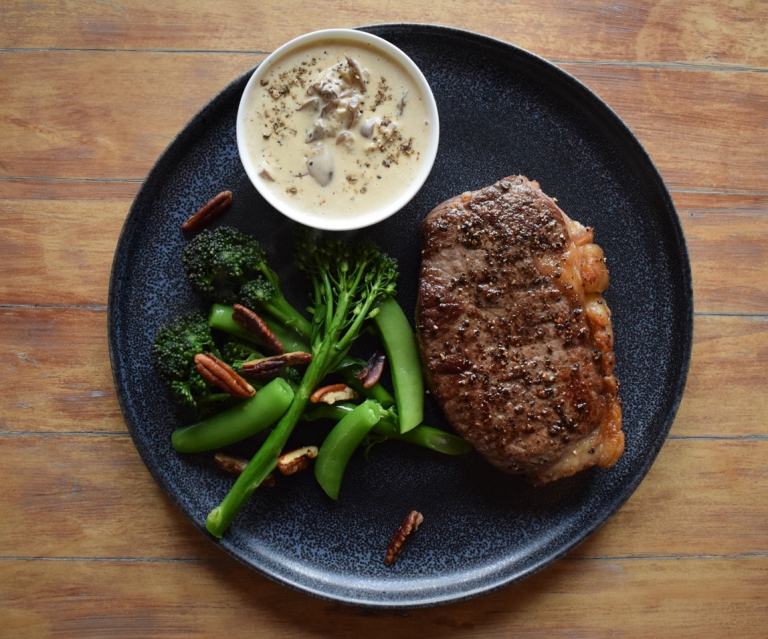 I’ve wanted to create a modern take on peppercorn sauce to celebrate the fact I’ve been invited once again to be a chef judge at this year’s World Steak Challenge in Dublin. So I came up with a truffle and peppercorn sauce, but don’t worry there are ways to add a delicious truffle flavour without breaking the bank.

Earlier this year when I was at a food show I was given some new truffle products made by a company called Trufo.  I  used a teaspoon of Truffle Porcini sauce which is actually more like a puree; a puree of vacuum cooked porcini mushrooms, that they then add burgundy truffles to. A 50 gram jar costs  a very reasonable 5.99 euros (currently £5.13). I also used a little sprinkle of a product called truffle earth  to intensify the truffle flavour in the sauce.

Presentation
The starting point for me is the plate, I’ve been searching for a dark coloured dinner plate for some time, then I found one I liked on the Habitat site. I tried asking their press department if I could borrow a dinner plate for the shoot, but after several emails and a voicemail to their press department which got no response, I decided to bite the bullet and buy one.   Next question is should I slice the steak? Put the sauce on the side? There are lots of versions of peppercorn sauce: which will look best for photography?

Steak
The worst steak to use for pepper steak is a fillet steak (filet mignon) because the flavour of the steak is not strong enough to stand up to the peppercorns.
So I would recommend a well aged sirloin steak (the aging makes the steak more tender and also improves the flavour). As for size that is a personal thing but I used 10 oz (285 grams) steak that was already trimmed to my specs so it did not need further trimming.

Cooking the Steak
People often mess up cooking steak at home because they don’t get the pan hot enough. If you have your smoke detector close to your kitchen then open a window to prevent your alarm inadvertently going off.

Chef’s Tips
If you wish to serve potatoes with the steak then I suggest you keep it simple because of the complex flavours of the sauce and steak, so a baked potato or baby potatoes will do just fine, and without butter or sour cream because you have sauce to dip them into.

Some of you might have noticed that there is no brandy (cognac) in my modern version of peppercorn sauce, this was intentional. Usually the cognac is there to add depth of flavour, but in my sauce the porcini and truffle add plenty of flavour making the alcohol unnecessary.

All photographs and recipes are the property of ©Kevin Ashton 2019 unless stated.