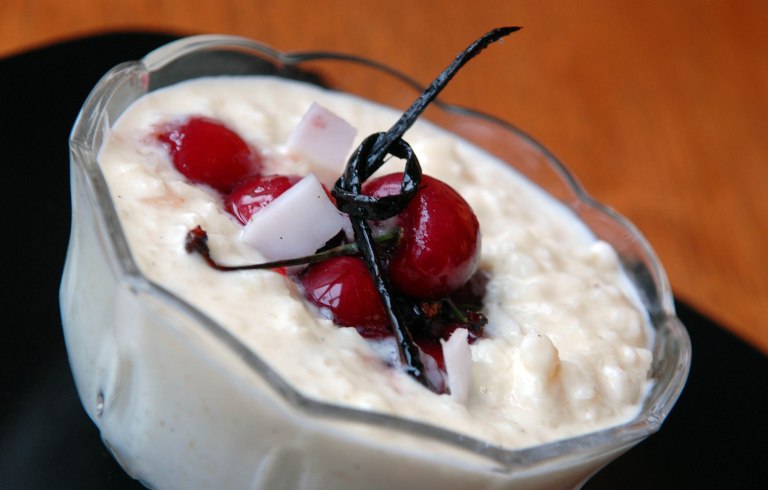 After tasting various dishes made from rice at Hyper Japan, it made me think of a rice pudding recipe I wrote some time ago using flaked rice. Flaked rice is dehusked rice that is then rolled to flatten it in a similar process to rolling oats. Flaked oats can be eaten* raw or cooked and are easy to digest.

Usually rice pudding can take a long time to make well, but by using flaked rice you can cut down the cooking time dramatically.  I’ve cut down the amount of sugar in the rice pudding, which allows the coconut flavour to shine through.

To Serve
Divide the rice pudding into 4 warm bowls then spoon over the cherries and a couple of vanilla pod shreds.

Chef’s Tip
Using a fresh coconut for this recipe makes a huge difference to the taste and is well worth the effort.  You can substitute a cherry liqueur if you can not find Kirsch, the main thing is to use a liqueur that has a good cherry taste rather than a cherry brandy.

* To eat flaked rice without cooking it you need to soak it for about 4 hours in milk or almond milk first.