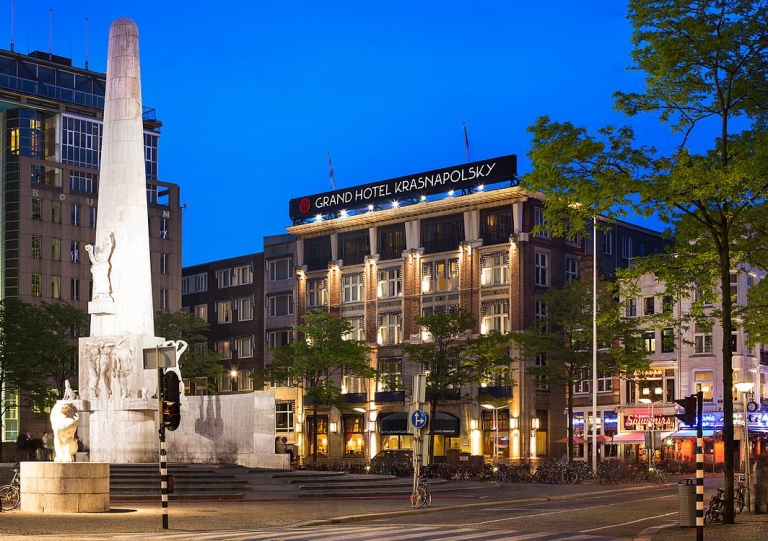 Often in life, time goes faster than we think. The mundane things in life get in the way of plans and suddenly another year has gone by.  Amsterdam is a city I lived in for two very happy years, and yet I’ve only been back once since I left.

Thankfully, my wonderful wife put a stop to my prevaricating and we revisited my past. I guess whenever one goes back to an important place in one’s life we do so with a certain amount of trepidation, for fear the experience will in some ways sully our memories.

Although Sophie had planned this short trip for some time, I on the other hand left it to the last-minute to contact the Grand Hotel Krasnapolsky (the place I used to work) until two days before we went.  I had been in touch with the Krasnapolsky some 12 months earlier during their lengthy 82 million euro refurbishment of the hotel (which dates back to 1855) but my plans at that time hadn’t firmed up.

The hotel has a fairly unassuming appearance from Dam Square; it looks squashed out of the way rather than prominent, but just like the Tardis once you’re inside and when you begin explore the Krasnapolsky you’re amazed at its size! Every morning, breakfast is served in the Winter Garden, a large glass roofed conservatory which dates back to circa 1880. 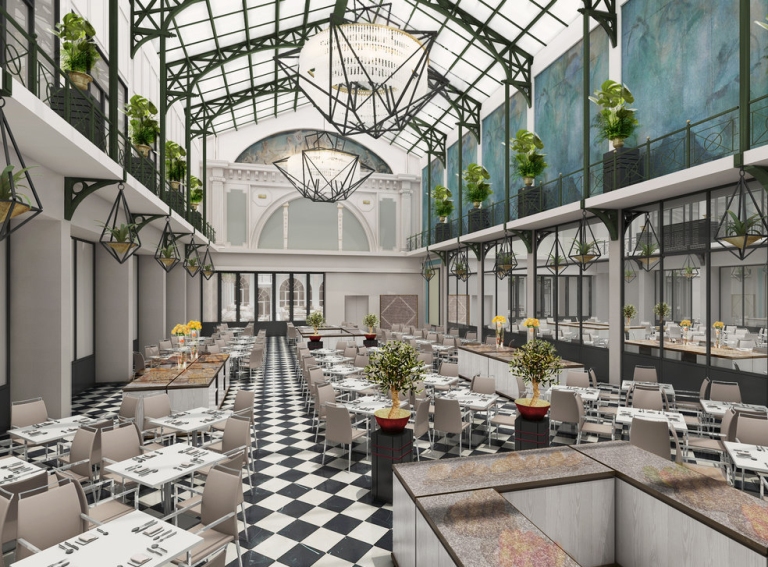 Whatever your requirements from a hotel, Grand Hotel Krasnapolsky has you covered with: 451 spacious rooms, 22 meeting rooms, and a 60-seater Michelin starred restaurant called The White Room. The restaurant was set up by 3 star Jacob Jan Boerma in the beautiful 19th century listed room, and is run by Chef de Cuisine Arturo Dalhuisen who has already won 1 Michelin star in late 2017. 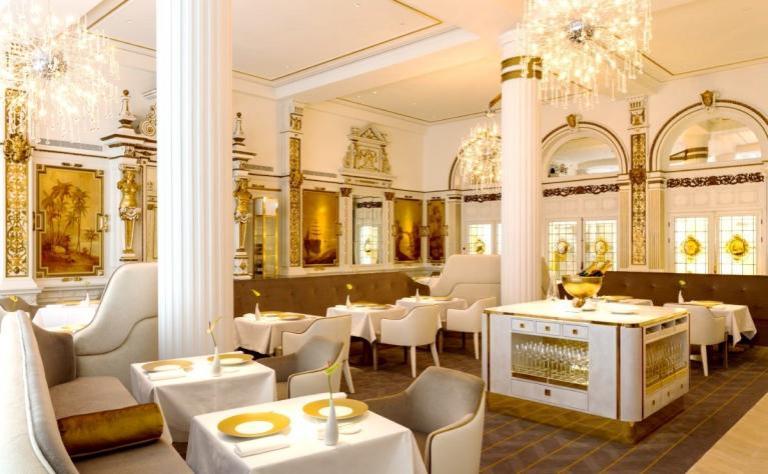 We were invited to a private tour, sampling some of the hotels function and luxury bedrooms. 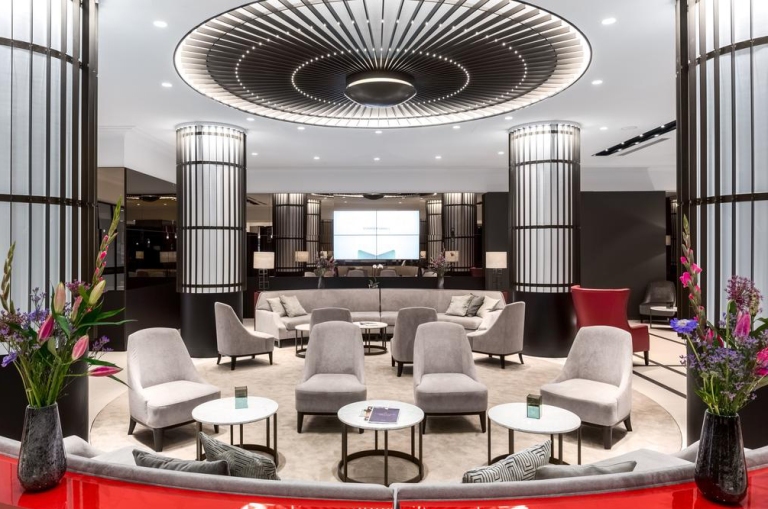 Including their Presidential suite (which has its own private dining room), in which we were treated to a special dessert involving the use of liquid nitrogen so that not only is the ice cream kept colder for longer but it looks like it’s smoking, the effect is mesmeric! 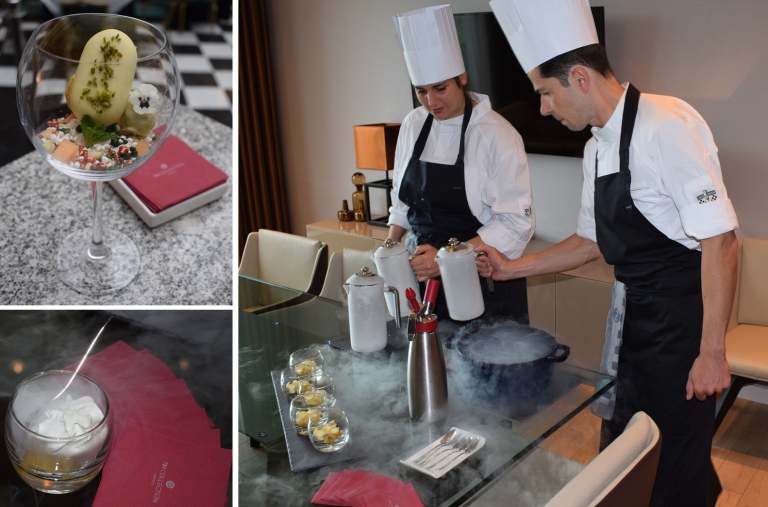 I rounded off my tour of the Krasnaposky with a visit to the kitchen when my helpful guide (Nathalie) pointed out there was still one chef from my time there.  I was pleasantly amazed to find Lenny, who is now Exectutive Sous Chef and is still at the ‘Kras’.  We swapped stories and reminisced before Sophie reminded me of our scheduled commentments, so we reluctantly left.

The Centrum or centre of Amsterdam is much more compact that London or Paris, hemmed in by the canal system, but don’t let that fool you there are plenty of things to see and do. 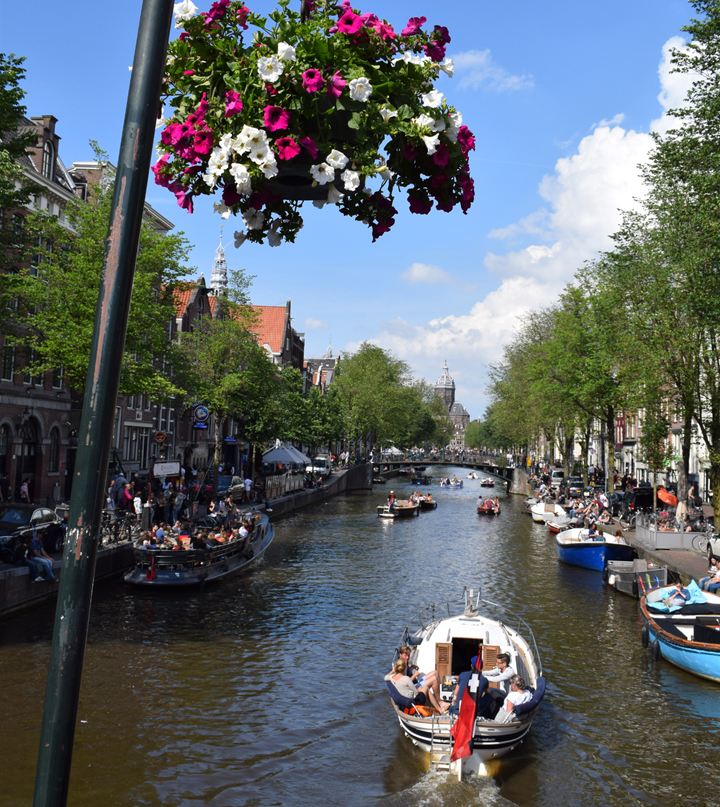 For first time visitors a canal boat ride is a good place to start and gives you flavour of the history, museums and art that is in Amsterdam. From Ann Frank’s or Rembrant’s house, the many museums and art galleries that fill the city. Passing the narrow gabled houses  of various colours that are so typical in the Netherland’s capitial.

Since I was last there Amsterdam is even more popular when it comes to attracting tourists.  Whatever the time of year there is always something cultural going on, in this vibrant city that’s overflowing with art and history. 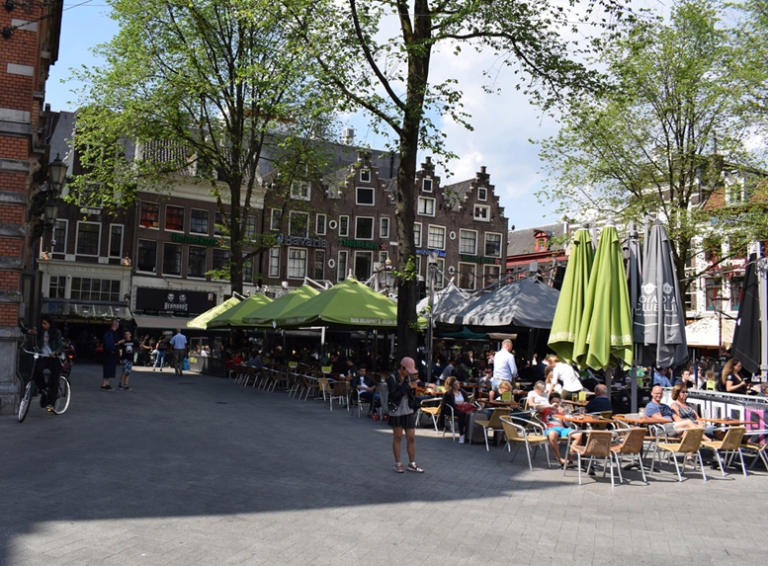 But the city is also buzzing and friendly, so in the warmer months I recommend heading to a square named the Leidseplein “Place of Lights” where there are plenty of bars and restaurants to choose from, plus side-walk cafes to sit out in and watch the world go by. Being such a cosmopolitan city there’s a large variety of cusines to try from: Michelin stars all the way, to fast food and take-a-way. Talking of which, a unique Dutch idea of fast food is the Automat. Besides having a counter where you can order your food and wait for it, there’s a bank of coin operated vending type machines built into the wall where a selection of menu items (hot and cold) are ready. The Automats are constantly topped up as the night goes on. 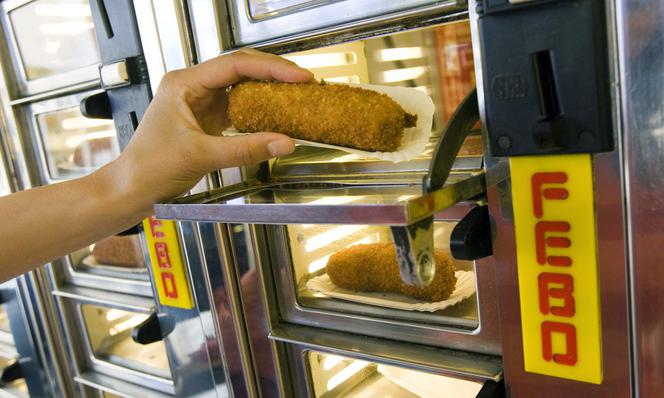 Since my last visit Cheese shops have grown in number, so I wanted to take this opportunity to enjoy some of the amazing cheeses that are produced in Holland. 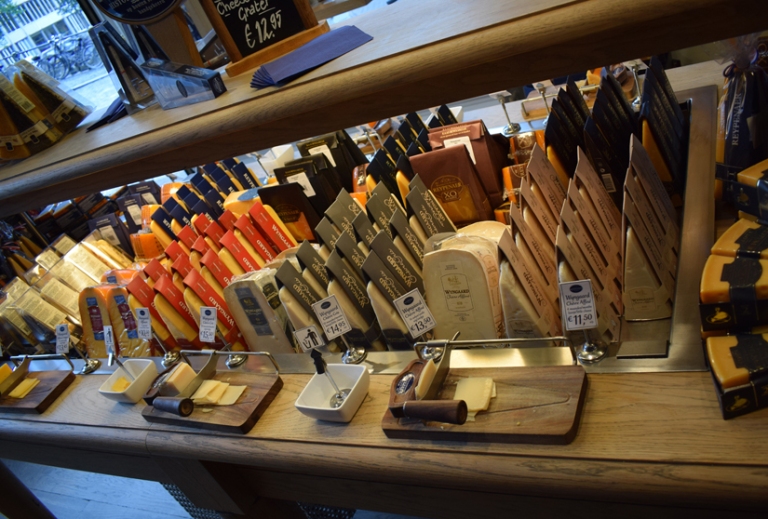 I first wrote about Dutch Cheeses back in 2009 and you can read that blog post here.
Since that time mature Gouda and some other wonderful Dutch cheeses have begun to appear in UK supermarkets, but they are still not common place, so if you are planning a trip to Amsterdam you should definitely add a visit to your “to do list”.  Sophie and I were invited to one of the very best cheese tasting shops called the Reypenaer Tasting Room
After enjoying some cheese samples in the shop, we joined a cheese tasting class that was very informative and offered lots of suggestions of cheese pairings, including different wines, port and even (with the more mature Gouda) gin! 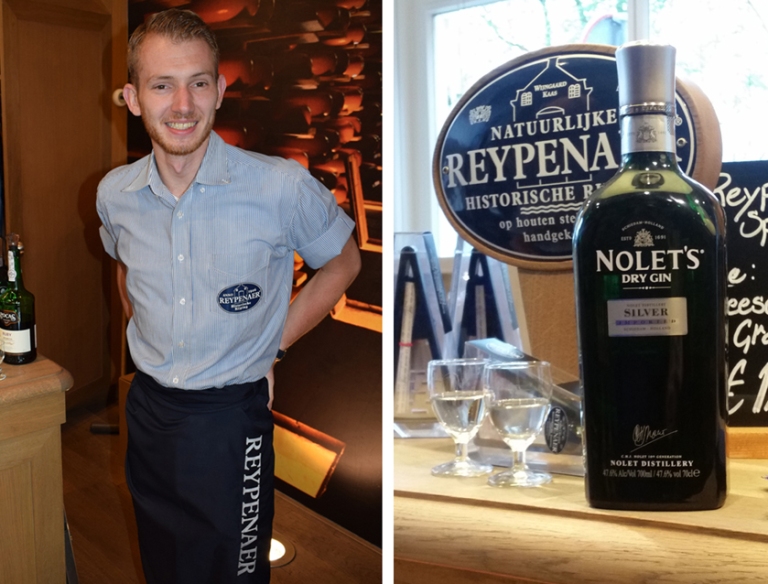 I’ve seen quite a few museums in the UK and other countries but the Rijksmuseum is one of my favourite, stuffed with world famous art and priceless antiques (including many of Rembrants paintings). Best to get your tickets the day before if your schedule allows. Not only is the museum packed with treasures, but the building and its gardens are perhaps the most attractive you will ever find. 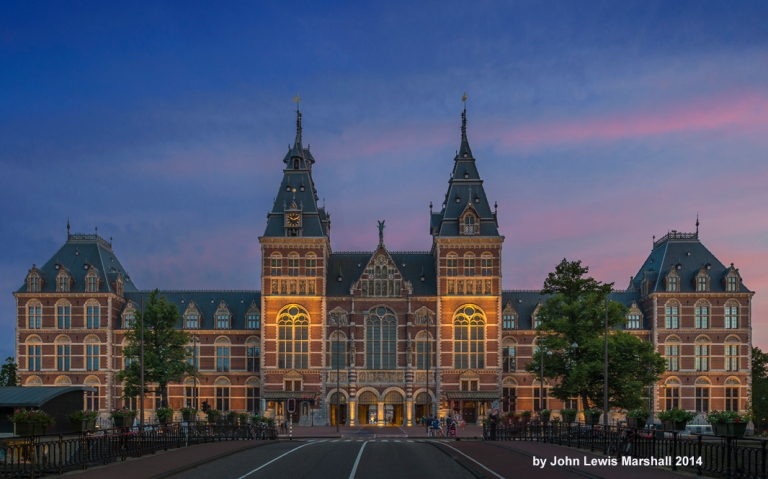 Just a stones throw away is the Van Gogh Museum celebrating the art and life of this extraordinary talented painter and troubled man, which is another must see, especially if you love impressionism paintings. But more than that, the museum houses a collection of Vicent’s drawings and letters. You can even discover the places in Europe were he lived and worked to really get a sense of who the man was.

Not so well know but well worth a visit is the National Maritime Museum. Built in 1656, the former national naval warehouse was once used by the Dutch navy to store sails, ropes, weapons and ammunition, known as the Scheepvaartmuseum in Dutch.

The building itself has a fortress type appearance because it was built on an artificial island in the harbour and is surrounded by water. To create the island 2300 wooden piles had to be sunk deep into the muddy ground and was an engineering marvel of its day.

You enter the museum from the south which takes you into a large courtyard that occupies the centre space of the building. From the court-yard  visitors can explore the other  three wings of the building (West, North and East). During a major renovation (2007-2011)  the vast space of the inner courtyard was covered by a glass roof, creating a pleasant all weather space for the visitors. 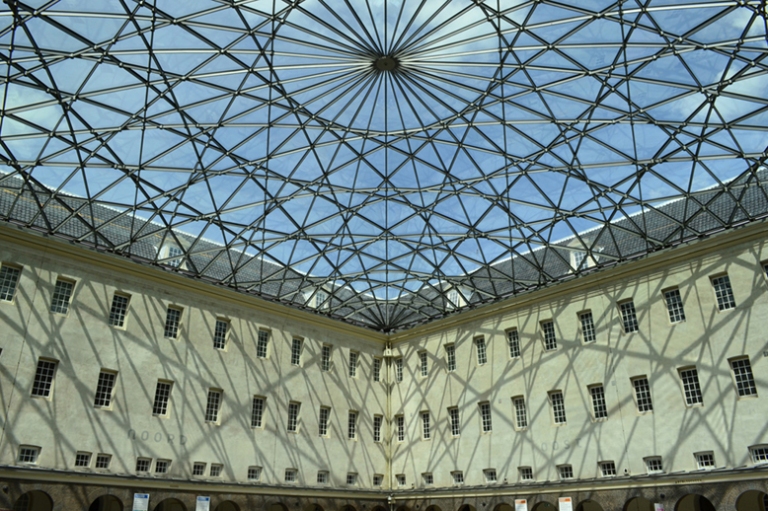 Besides housing 500 years worth of Dutch maritime history you can also explore a replica of the three-masted “Amsterdam”, a large vessel of the Dutch East India Company, which is permanently moored alongside the museum. 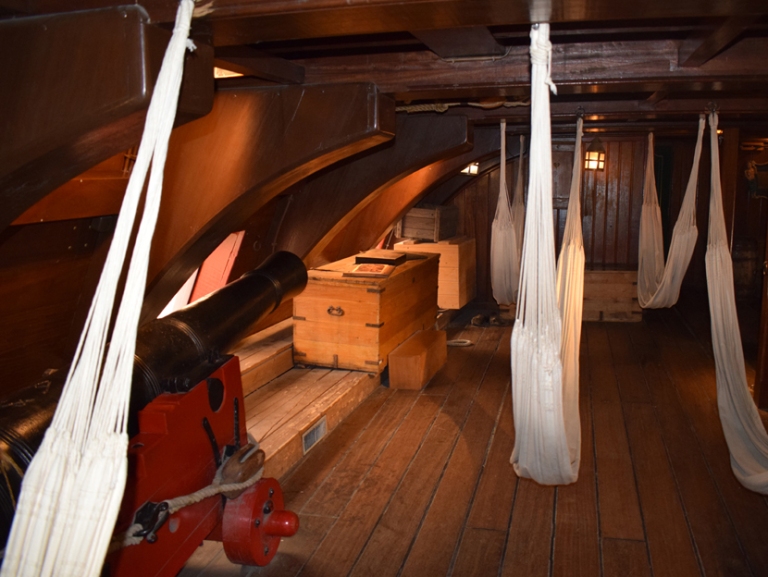 Other Museums and Art Galleries

Plus there are numerous small private art galleries scattered around the capital and many of these can hold unexpected artistic gems.

If you visit Amsterdam during the summer months you could consider having a lazy afternoon on the local beach. Most tourists don’t realise that there are 2-3 beaches in easy reach of the capital. The closest being Zandvoort which is about 30 minutes by train from the Central station.

If you’re feeling a little more energetic you might try Castricum which has a series of bike trails and sand dunes that lead down to the sea. 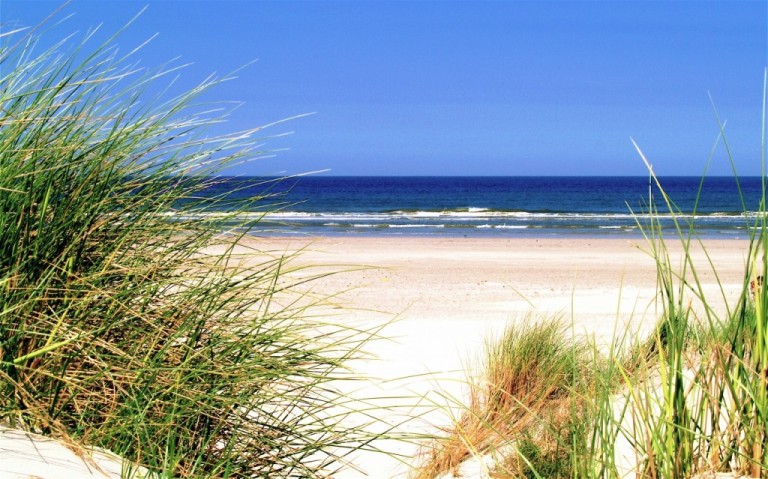 As I said earlier, there is always something happening in Amsterdam; from annual jazz festivals to perhaps its biggest festival called Sail Amsterdam, which happens every 5 years and is an amazing  gathering of tall sailing ships from around the world. This festival began in 1975 to celebrate the 700th anniversary of Amsterdam.  The last Sail event in 2015 attracted almost 2 million people. The next Sail happens in August 2020, so if your a lover of sailing ships start making plans.

Whenever I’m travelling to a capital city I try to make time beforehand to check the up coming cultural events. When travelling to Amsterdam this is my go to site. https://www.iamsterdam.com/en/see-and-do

I’ve enjoyed visiting Paris and Rome but the intimacy of Amsterdam is unique!