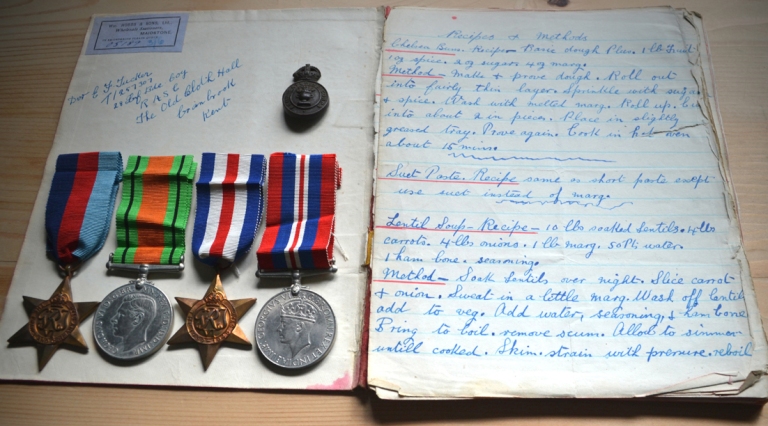 Gardeners were not in much demand in the Second World War, so when Edward Tucker was called up, the army decided to make him into a cook.

Recently, a few documents were handed to me by Edward’s daughter Ann, I guess we all need to make a mark whilst we are here, something to remind or inform others of how it was.  Even older generations recognise the ability of the internet to preserve and perhaps share fragments of family history before they are lost forever.

Edward Francis Tucker was born in the village of Kinver, which is in the county of Staffordshire, England in 1904.  Considering the village even today only has a population of 7,225 it still has managed to have more than it’s share of historical buildings and brushes with history, going all the way back to an ancient Hill Fort atop the Edge which is possibly Bronze-age.

More recently, just over three years before Edward’s birth Kinver Light Railway, an innovative electric light tramway opened on 4th April 1901 and proved to be a great success by not only carrying passengers but also goods: minerals, livestock, milk and even the occasional funeral! For some of these items, they did attach a goods carriage at the back, which is reassuring.

Growing up in a rural village, it is understandable that Edward turned his hand to gardening.  As his skill as a gardener grew, it took him further afield into Birmingham (perhaps because of the improved transport connections ), where he worked for several wealthy families in the well to do area of Edgbaston.

Called up at the age of 37 in 1941 Edward was assigned to the Royal Army Service Corps. After his initial basic training, he was taught to drive lorries for logistical support. Later in 1943 as Britain and her allies geared up for D-Day, Edward took an army trades cooks course in Maidstone where he was trained to be a cook in the Army Catering Corps. After his training, he was stationed in Cranbrook Kent, at the 15th century Old Cloth Hall, a large a building that was commandeered  during the World War II to help the war effort. This Grade II listed building got its name from the Broadcloth industry that created great wealth in the area between the 14th-16th century. 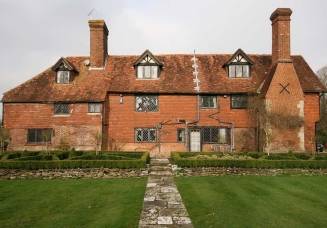 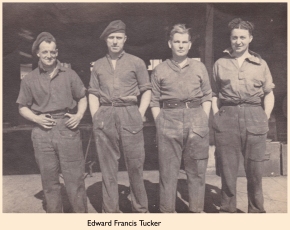 Historic Note
The Army Catering Corps was formed in March 1941 to provide a central standard of training and administration for all army cooks. 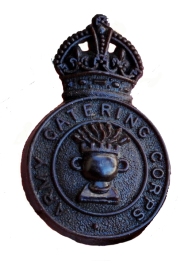 The 1st pattern badge was produced in May of the same year, an all-brass badge depicting a Greek Brazier within a crowned circle and bore the Corps title.The 2nd pattern was issued in 1942 in (which is the one Edward wore, which was chocolate-brown plastic as an economy measure made by F&G (Fraser & Glass ) or A. Stanley & Sons, Walsall). In later years the Army Catering Corps added the words ‘We Sustain’ to the bottom of the badge.

Concerned to do well, Edward took careful notes of the recipes he was taught, methods of butchery, methods of cookery. His daily log which is a fascinating insight to what his job entailed. The handwritten book also contains how to put together an Aldershot (field) oven and also how to make an oven from petrol cans.

Edward was shipped to Belgium in late 1944 to support and feed the fighting soldiers of the Second British Army that helped liberate the country. During Edward’s time in Belgium, he made some friendships that lasted after the war. 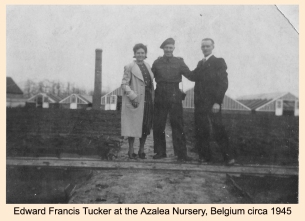 Like many children of World War II veterans, Ann knew very few details about her dad’s time in the army but she does remember as a teenager, visiting her dad’s friends.

The cost of World War II bankrupted the United Kingdom and caused many hardships for years afterwards, including the continuation of food rationing for 9 more years up until 1954.  In 1946 the country’s finances were in such bad shape we signed a loan agreement with the Americans that was not fully paid off until 2006. So when Ann made the trip she was amazed at the cream cakes in the Belgium shops. On her return trip, the kindly Belgium friends gave Ann a large piece of meat to take home for her family.

But all that teenager Ann could think about was how terrified she was at the thought of being stopped at customs and that her clothes would smell of meat. As it turned out although her girlfriend had her suitcase searched, she did not.

Chelsea Buns
I thought I should share one of Edward’s recipes and hope you will give it a try. First created by the Bun House in Chelsea in the 18th century,  and made famous by the Royal family and London’s elite.   Here is Edward’s own recipe dated 1943.  Of course, I had to scale his recipe down because I don’t have 200 soldiers coming for tea!

Many modern recipes for Chelsea Buns have eggs in them but I wanted to replicate Edwards army recipe straight out of his notebook.  During World War II, eggs were in short supply even in the armed forces. Also, modern recipes have orange or lemon zest but again during the war they unavailable so I’ve made sure to use mixed dried fruit that contained orange and lemon rind.

© Kevin Ashton 2016 all rights reserved.  None of my articles or recipes may be reproduced without my permission.

10 thoughts on “A Gardeners Tale”